You are here: Home / ARTICLES / WHY I AM NOT A MORMON

MORMONS ARE NOT CHRISTIANS 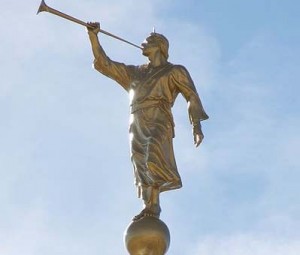 Mormons are not Christians

A Christian is one who has accepted the gospel as presented by Paul in I Cor. 15. He has no other rule for faith and practice. Mormons believe no such thing. They call themselves Latter Day Saints. What they mean by that is that the early church went into total apostasy and that there was no gospel preached until Joseph Smith received his angelic revelation on some golden plates he found under a tree in early 1800. He also needed a special pair of spectacles, provided by the angel, before he could read the plates. The plates contained another Bible, another church, another Jesus, another god, and another plan of salvation. Thus, began the Latter Day Saints.

This is exactly how Islam was founded. An angel revealed the new religion to Mohamed 600 years after the death ofChrist. Mormons also hold in common with Islam the doctrine of multiple wives in this life and in the life to come. Islam has the advantage. The women awaiting them will be 70 brown-eyed virgins. Thus, neither religion is Christian.

“The history of The Church of Jesus Christ of Latter-day Saints (LDS Church) is typically divided into three broad time periods: (1) the early history during the lifetime of Joseph Smith, Jr. which is in common with all Latter Day Saint movement churches, (2) a “pioneer era” under the leadership of Brigham Young and his 19th Century successors, and (3) a modern era beginning around the turn of the 20th century as the practice of polygamy was discontinued.

The Church of Jesus Christ of Latter-day Saints traces its origins to western New York, where Joseph Smith, Jr., founder of the Latter Day Saint movement was born and raised. Joseph Smith gained a small following in the late 1820s as he was dictating the Book of Mormon, which he said was a translation of words found on a set of golden plates that had been buried near his home in western New York by an indigenous American prophet. On April 6, 1830, in western New York, Smith organized the religion’s first legal church entity, the Church of Christ. The church rapidly gained a following, who viewed Smith as their prophet. The main body of the church moved first to Kirtland, Ohio in the early 1830s, then to Missouri in 1838, where the 1838 Mormon War with other Missouri settlers ensued, culminating in adherents being expelled from the state under Missouri Executive Order 44 signed by the governor of Missouri. After Missouri, Smith built the city of Nauvoo, Illinois, near which Smith was assassinated. After Smith’s death, a succession crisis ensued, and the majority voted to accept the Quorum of the Twelve, led by Brigham Young, as the church’s leading body.”

Paul said, “I marvel that ye are so soon removed from him that called you into the grace of Christ unto another gospel: 7 Which is not another; but there be some that trouble you, and would pervert the gospel of Christ. 8 But though we, or an angel from heaven, preach any other gospel unto you than that which we have preached unto you, let him be accursed. 9 As we said before, so say I now again, If any man preach any other gospel unto you than that ye have received, let him be accursed.” Gal. 1:6-9. According to Paul, all Mormons are under God’s curse.

Mormons do not believe any Bible is inerrant or infallible

The Church has 4 Standard Works that are authoritative:  The Bible (in so far as it is translated correctly), the Book of Mormon, Doctrine & Covenants, and Pearl of Great Price.  Speeches and writings of the current president of the church are also authoritative.

Mormons do not believe there is only one God

There are many Gods. Brigham Young-Journal of Discourses 7:333 “How many Gods there are, I do not know.  But there never was a time when there were not Gods.

Mormons do not believe Jesus is God

One of the main fundamentals of orthodox Christianity is belief in the virgin birth of the Savior.  Statements from the LDS church leaders show that they have a different view of Christ.  Bruce McConkie, a Mormon Apostle, teaches in his book, Mormon Doctrine, “Christ was begotten by an immortal father in the same way that mortal men are begotten by mortal fathers.”  (p. 547)  Joseph Fielding Smith, tenth President and Prophet of the Mormon Church claimed, “Christ not begotten of Holy Ghost…He was not born without the aid of Man and that Man was God!”  (Doctrines of Salvation, 1:18).  By worshipping such a being the Mormons fall under the condemnation of Romans one by changing “the glory of the incorruptible God into an image made like to corruptible man” (1:23).

The Bible is full of verses proclaiming the saving power of Christ’s blood that was shed for us on the cross.  Despite all the verses forcefully declaring the importance of Christ’s blood, the Mormon pamphlet found in almost every LDS visitors centers titled, What the Mormons think of Christ, refutes the saving grace of Christ’s sacrifice.  On page 22 we find this written, “Christians speak often of the blood of Christ and it’s cleansing power.  Much that is believed and taught on this subject is such utter nonsense and so palpably false that to believe it is to lose one’s salvation.  For instance, many believe or pretend to believe that if we confess Christ with our lips and avow that we accept Him as our personal savior we are thereby saved.  They say His blood, without any other act than mere belief makes us clean.”

Mormons do not believe one can be saved without accepting Joseph Smith as God’s Prophet. (Sounds like Islam, doesn’t it?)

The Bible teaches that Jesus is the only giver of salvation and that no man cometh unto the Father but by Him (John 3:16 & John 17:6).  The Jesus of Mormonism claims no such authority.  Mormonism teaches that in order to be saved on must believe in Joseph Smith, their founder, as well as believe in their Jesus.  In his book Doctrines of Salvation, 1:189, Joseph Fielding Smith proclaims, “NO SALVATION WITHOUT ACCEPTING JOSEPH SMITH”.  Brigham Young said, “From the day the Priesthood was taken from the earth to the winding up scene of all things, every man and woman must have the certificate of Joseph Smith, Junior, as a passport to their entrance into the mansion where God and Christ are.”  He also said, “No man or woman in this dispensation will ever enter into the celestial kingdom of god without the consent of Joseph Smith” (Journal of Discourses, 7:289).

Mormons do not believe non-Mormons are saved

Orson Pratt (Mormon Apostle)–“..all other churches are entirely destitute of all authority from God; and any person who receives baptism of the Lord’s supper from their hands highly offend God, for he looks upon them as the most corrupt of all people” (The Seer, pg 255)

I could give a dozen other reasons why I am not a Mormon. Need more proof? Let me know. Most of these answers are provided by others.