You are here: Home / ARTICLES / WHO’S ON FIRST? THE CHURCH?

WHEN DID THE CHURCH BEGIN? 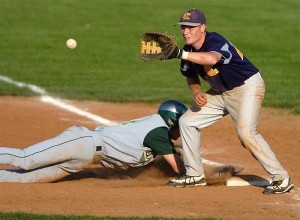 “Salute Andronicus and Junia, my kinsmen, and my fellowprisoners, who are of note among the apostles, who also were in Christ before me.” Romans 16:7.

One’s view of when the Church, the body of Christ, and the dispensation of grace started will determine how the verses in the above context are interpreted. A few examples of the differing views of when the church began will clarify that point. However, the fact that there are many views on the birth of the church is another issue altogether.

There are those who hold that the church has existed from the time of Adam. They argue that all the people who follow God are the people of God and constitute the church. Thus the church of today is simply a continuation of a long line of believers.

Some believe the church began in Matthew 4 when John the Baptist called his first disciples. Others view Matthew 10, Matthew 16, Acts 2, Acts 9 and after Acts 28! So, there is little wonder as to the confusion about this matter. The position one takes will of necessity determine how all other scripture will be interpreted.

Those who question that the church started with Paul, site the above verse to show that there were those “in Christ” prior to Paul’s conversions. Thus, they choose an earlier date for the birth of the church. However, the above verse does not say anything about anyone being in the church; it speaks of being in Christ. One could have been in Christ, redemptively; without being in the Church which was a mystery; but one cannot be in the Church, which is His body without being in Christ.

If we accept the idea that being in Christ was synonymous with the Church, then we must concede that one can be cut off and loose his salvation. John 15 is clear that Christ is the vine and certain believers are the branches. “I am the true vine, and my Father is the husbandman.  Every branch in me that beareth not fruit he taketh away: and every branch that beareth fruit, he purgeth it, that it may bring forth more fruit. Now ye are clean through the word which I have spoken unto you.  Abide in me, and I in you. As the branch cannot bear fruit of itself, except it abide in the vine; no more can ye, except ye abide in me.  I am the vine, ye are the branches: He that abideth in me, and I in him, the same bringeth forth much fruit: for without me ye can do nothing.  If a man abide not in me, he is cast forth as a branch, and is withered; and men gather them, and cast them into the fire, and they are burned.  If ye abide in me, and my words abide in you, ye shall ask what ye will, and it shall be done unto you. Herein is my Father glorified, that ye bear much fruit; so shall ye be my disciples.” John 15:1-8.

The Church revealed to Paul was a mystery from before the foundation of the world and was revealed to him.

If being in Christ is the same as being in the Church, which is His body, then the brethren must do some Biblical gymnastics with the above verses to maintain an eternal security view. Now, don’t pretend that the above verses do not say He was in them, and they in Him. It won’t work.

The Church revealed to Paul was a mystery from before the foundation of the world and was revealed to him. “If ye have heard of the dispensation of the grace of God which is given me to you-ward:  How that by revelation he made known unto me the mystery; (as I wrote afore in few words,  Whereby, when ye read, ye may understand my knowledge in the mystery of Christ)
Which in other ages was not made known unto the sons of men, as it is now revealed unto his holy apostles and prophets by the Spirit;  That the Gentiles should be fellowheirs, and of the same body, and partakers of his promise in Christ by the gospel:  Whereof I was made a minister, according to the gift of the grace of God given unto me by the effectual working of his power.  Unto me, who am less than the least of all saints, is this grace given, that I should preach among the Gentiles the unsearchable riches of Christ;  And to make all men see what is the fellowship of the mystery, which from the beginning of the world hath been hid in God, who created all things by Jesus Christ:” Ephesians 3:2-9. Note the bolded words.

Finally, we ask, why Paul? If the Church which was the mystery was prior to Paul, and the commission was given to the Twelve to take this gospel into the entire world and to every creature, why was Paul saved, commissioned, given the gospel by divine revelation, and used to write the Church epistles? Why not use the Twelve who were given the great commission in Matthew, Mark and Luke, and Acts 1:8? In addition, they had over three years of personal training by the Lord Jesus Christ.

Believers, prior to Paul were in Christ by identification with Him in John 15. After His death, believers were in Him by redemption of His blood. But, none were in the Church which was kept a secret until it started with the Apostle Paul. The church, which is the body of Christ, is made up of Jews and Gentiles who lose their distinction in the one body. Paul was both a Jew and a Gentile, and no doubt, the first in the Body of Christ. It seems evident to me that the dispensation of Grace and the Church, which is the One New Man and a New Creation, begin with Paul. This in no way nullifies the practice of water baptism.