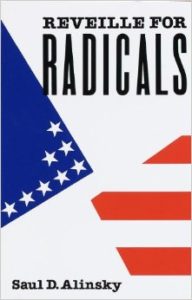 I have finished Rules for Radicals, and am going through it a second time to ensure I clearly understand it.

Alinsky is considered the founder of modern community organizing. He is noted for his 1971 book, Rules for Radicals. (The word “Rules” is misleading, but it follows the intent of the book. It is softer than any other synonym.)

Alinsky received much criticism, but also gained praise from many public figures. In the 1950’s, he began turning his attention to improving conditions in the African-American ghettos, beginning with Chicago and other trouble spots. (We can see how he helped Chicago.) His ideas were adapted in the 1960’s by some U.S. college students and other young counterculture-era organizers, who used them as part of their strategies for organizing on campus and beyond.

Alinsky was born in Chicago in 1909 to Russian Jewish immigrant parents. Whenever anyone asks of his religion, he always says—Jewish. At the same time, he was also an agnostic. He chose Jewish to help create animosity and hatred.  By 1939, he became active in general community organizing, starting with the Back of the Yards and other poor areas on the Southside of Chicago. His early efforts were to turn scattered, voiceless discontent into a united protest. As a result of his efforts and success at helping slum communities, Alinsky spent the next 10 years repeating his organization work across the nation. By 1950 he turned his attention to the black ghettos of Chicago. (He used the poor and discontent to promote his agenda.) He traveled to California at the request of the San Francisco Bay Area Presbyterian Churches to help organize the black ghetto in Oakland. Hearing of his plans, the panic-stricken Oakland City Council promptly introduced a resolution banning him from the city.

He trained organizers and assisted in the founding of community organizations around the country.

In his book, Alinsky addressed the 1960’s generation of radicals, outlining his views on organizing for mass power. He says, what follows is for those who want to change the world from what it is to what they believe it should be. (The interesting thing is, he purposefully avoids stating what the end view is. In fact, there is no end view.)

The Prince was written by Machiavelli for the Haves on how to hold power. Rules for Radicals is written for the Have-Nots on how to take it away. (That pretty well sums it up. Rob those who have, keep what you want and give the rest to those who riot, burn and steal for you.)  One of the most important things in life is whether you’re right. If you don’t have that, if you think you’ve got an inside track to absolute truth, you become doctrinaire, humorless and intellectually constipated. The greatest crimes in history have been perpetrated by such religious, political and racial fanatics, from the persecutions of the Inquisition on down to Communist purges and Nazi genocide. (The reason? They thought there was absolute truth. Organizers must never embrace any dogma held as true.)

[pullquote align=”right” cite=”” link=”” color=”” class=”” size=””]Alinsky’s motto: Rob those who have, keep what you want and give the rest to those who riot, burn and steal for you.[/pullquote]

In Rules for Radicals he taught that the job of the organizer is to maneuver and bait the establishment so that it will publicly attack him as a “dangerous enemy.” According to Alinsky, the hysterical instant reaction of the establishment will not only validate the organizer’s credentials of competency but also ensure automatic popular invitation.

Rules for Radicals fell under two of his rules:

Rule 3.  Wherever possible, go outside the experience of the enemy; and

Rule 4: Ridicule is man’s most potent weapon. (The reader should note this.)

Alinsky described his plans for 1972 to begin to organize the white middle class across the United States, and the necessity of that project. Saul Alinsky championed new ways to organize the poor and powerless that created a backyard revolution in cities across America. Among those influenced by Alinsky were, Ralph Nader, Cesar Chavez, Jesse Jackson and Hillary Rodham. Clinton wrote her senior thesis on Alinsky’s work, with Alinsky himself contributing his own time to help her. Although Rodham defended Alinsky’s intentions in her thesis, she was critical of his methods and dogmatism. (Years later when she became First Lady, the thesis was not made publicly available by the school based upon a White House request.)

Shortly before his death he had discussed life after death in Playboy:

ALINSKY: … if there is an afterlife, and I have anything to say about it, I will unreservedly choose to go to hell.

ALINSKY: They’re my kind of people. 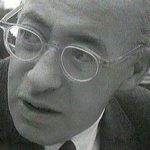 Alinsky’s playbook was was dedicated to the Devil and he concludes with the same theme. It was  inspired in hell, and while there, he will have devils dancing around and jesting at what a fool he was. Also, He that sitteth in the heavens will laugh with scorn at him. He will be so busy, that he will not have time to think about organizing anyone. He will want water.