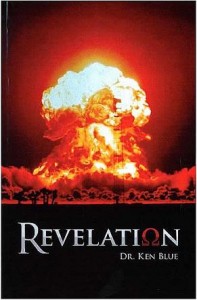 An identifying mark of all heathen nations is idolatry and immorality. This indictment reaches far beyond, and before, pagan Rome or papal Rome. It existed thousands of years before Rome ever became a nation.

John says he saw, “…that great city, which reigneth over the kings of the earth.” (Revelation 17:18) – supported by the scarlet colored beast which “was, and is not and shall ascend out of the bottomless pit…” (v 8).  The eighth beast is the Antichrist. He is a man and will be directed and empowered by the beast from the pit.  The beast, which ascends out of the pit, is a satanic angel which ruled over the kingdom of Greece.  You will notice that the beast, collectively, has seven heads and ten horns. The seven and the ten may be contemporaries during the last half of the tribulation.

Some commentators believe seven of the former demonic powers, or beasts, come from below and rule within the kingdom of the Antichrist, along with the ten kings. All would be ruling collectively, and each king would rule its own army. The beast would then have its seven heads and ten horns. This would form one superhuman power under the rule of Satan. It would be in its supernatural form.

“And the woman was arrayed in purple and scarlet colour, and decked with gold and precious stones and pearls, having a golden cup in her hand full of abominations and filthiness of her fornication:” (Revelation 17:4).

The city, v.18, was adorned with purple and scarlet colors and garnished with precious stones.  The description of the city shows its wealth and luxuries. The metals and colors do not indicate anything else. Gideon, when asked to rule over Israel, declined. However, he did request that each warrior give him an earring of gold they had taken from their enemies.  “And the weight of the golden earrings that he requested was a thousand and seven hundred shekels of gold; beside ornaments, and collars, and purple raiment that was on the kings of  Midian, and beside the chains that were about their camels’ necks” (Judges 8:26).  Note also the wealth of King Ahasuerus, which was displayed at his party. “Where were white, green, and blue, hangings, fastened with cords of fine linen and purple to silver rings and pillars of marble: the beds were of gold and silver, upon a pavement of red, and blue, and white, and black, marble” (Esther 1:6).  Revelation 17:4 describes the wealth of Babylon. It is her luxuries and idolatrous worship that attracted the nations to her. The cup in her hand is not the mass offered by the Catholic Church. The golden cup symbolizes the abominations and filthiness of her idolatrous system, which she extends to the nations and of which they drink.

“And upon her forehead was a name written, MYSTERY, BABYLON THE GREAT, THE MOTHER OF HARLOTS AND ABOMINATIONS OF THE EARTH.”  (Revelation 17:5).

The name of the woman was kept a secret until the end of the chapter. There, it is revealed that this is not any individual woman, but the great city, Babylon. Not only is the woman a material city, it is also its vast system of idolatry.

The woman is not Rome. She is much older and bigger than Rome. Rome is simply one of its many streams. Babylon is the fountainhead, the mother. Idolatry was in full bloom long before pagan or papal Rome ever existed. The corruption of Babylon had spread to the entire world hundreds of years before pagan Rome or papal Rome ever came into existence. Some examples are: “And they made a calf in those days, and offered sacrifice unto the idol, and rejoiced in the works of their own hands. Then God turned, and gave them up to worship the host of heaven; as it is written in the book of the prophets, O ye house of Israel, have ye offered to me slain beasts and sacrifices by the space of forty years in the wilderness? Yea, ye took up the tabernacle of Moloch, and the star of your god Remphan, figures which ye made to worship them: and I will carry you away beyond Babylon” (Acts 7:41-43).  See also, Amos 5:25-26, “Have ye offered unto me sacrifices and offerings in the wilderness forty years, O house of Israel? But ye have borne the tabernacle of your Moloch and Chiun your images, the star of your god, which ye made to yourselves.”  See 1 Kings 11:5, “For Solomon went after Ashtoreth the goddess of the Zidonians, and after Milcom the abomination of the Ammonites.”  For a shocking description of Babylon’s influence on Israel and an account of King Josiah’s zeal to clean up Judah, see 2 Kings 23:4-14. “And the king commanded Hilkiah the high priest, and the priests of the second order, and the keepers of the door, to bring forth out of the temple of the LORD all the vessels that were made for Baal, and for the grove, and for all the host of heaven: and he burned them without Jerusalem in the fields of Kidron, and carried the ashes of them unto Bethel.   And he put down the idolatrous priests, whom the kings of Judah had ordained to burn incense in the high places in the cities of Judah, and in the places round about Jerusalem; them also that burned incense unto Baal, to the sun, and to the moon, and to the planets, and to all the host of heaven.  And he brought out the grove from the house of the LORD, without Jerusalem, unto the brook Kidron, and burned it at the brook Kidron, and stamped it small to powder, and cast the powder thereof upon the graves of the children of the people.  And he brake down the houses of the sodomites, that were by the house of the LORD, where the women wove hangings for the grove.  And he brought all the priests out of the cities of Judah, and defiled the high places where the priests had burned incense, from Geba to Beersheba, and brake down the high places of the gates that were in the entering in of the gate of Joshua the governor of the city, which were on a man’s left hand at the gate of the city.   Nevertheless the priests of the high places came not up to the altar of the LORD in Jerusalem, but they did eat of the unleavened bread among their brethren.  And he defiled Topheth, which is in the valley of the children of Hinnom, that no man might make his son or his daughter to pass through the fire to Molech.  And he took away the horses that the kings of Judah had given to the sun, at the entering in of the house of the LORD, by the chamber of Nathanmelech the chamberlain, which was in the suburbs, and burned the chariots of the sun with fire.

And the altars that were on the top of the upper chamber of Ahaz, which the kings of Judah had made, and the altars which Manasseh had made in the two courts of the house of the LORD, did the king beat down, and brake them down from thence, and cast the dust of them into the brook Kidron.  And the high places that were before Jerusalem, which were on the right hand of the mount of corruption, which Solomon the king of Israel had builded for Ashtoreth the abomination of the Zidonians, and for Chemosh the abomination of the Moabites, and for Milcom the abomination of the children of Ammon, did the king defile.  And he brake in pieces the images, and cut down the groves, and filled their places with the bones of men.”

Are we to assume that Rome is the mother of these idolatries?  As wicked and corrupt as Rome is, she cannot be the mother. Rome is but one of the many polluted streams of Babylon.

Many have wrongly identified the woman, spiritualized the text, and made her the Roman Catholic Church. Then they contrast her with a true church, which they say, was started by John the Baptist. They conclude that the only true churches are the ones which came from John the Baptist. According to them, all other churches are “harlot” churches which came from their mother, the Roman Catholic Church. This false teaching has led to the teaching of a Baptist Bride Church as the only true church, and a rejection of all baptism except Baptist Bride baptism.