You are here: Home / ARTICLES / HOW DID HARRY REID GET RICH? 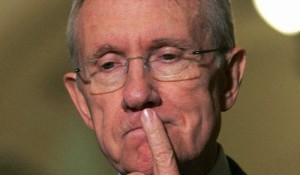 His career in public service has ended up being remarkably lucrative.

Try this thought experiment. Imagine that someone grows up in poverty, works his way through law school by holding the night shift as a Capitol Hill policeman, and spends all but two years of his career as a public servant. Now imagine that this person’s current salary — and he’s at the top of his game — is $193,400. You probably wouldn’t expect him to have millions in stocks, bonds, and real estate.

But, surprise, he does, if he’s our Senate majority leader, whose net worth is between 3 and 10 million dollars, according to OpenSecrets.org. When Harry Reid entered the Nevada legislature in 1982, his net worth was listed as between $1 million and $1.5 million “or more,” according to the Las Vegas Review-Journal. So, since inquiring minds inquire, let’s try to figure out how Reid’s career in public service ended up being so lucrative. He hasn’t released his tax returns, which makes this an imperfect science, but looking at a few of his investments helps to show how he amassed his wealth.

In 2004, the senator made $700,000 off a land deal that was, to say the least, unorthodox. It started in 1998 when he bought a parcel of land with attorney Jay Brown, a close friend whose name has surfaced multiple times in organized-crime investigations and whom one retired FBI agent described as “always a person of interest.” Three years after the purchase, Reid transferred his portion of the property to Patrick Lane LLC, a holding company Brown controlled. But Reid kept putting the property on his financial disclosures, and when the company sold it in 2004, he profited from the deal — a deal on land that he didn’t technically own and that had nearly tripled in value in six years.

When his 2010 challenger Sharron Angle asked him in a debate how he had become so wealthy, he said, “I did a very good job investing.” Did he ever. On December 20, 2005, he invested $50,000 to $100,000 in the Dow Jones U.S. Energy Sector Fund (IYE), which closed that day at $29.15. The companies whose shares it held included ExxonMobil, ChevronTexaco, and ConocoPhillips. When he made a partial sale of his shares on August 19, 2008, during congressional recess, IYE closed at $41.82. Just a month later, on September 17, Reid was working to bring to the floor a bill that the Joint Committee on Taxation said would cost oil companies — including those in the fund — billions of dollars in taxes and regulatory fees. The bill passed a few days later, and by October 10, IYE’s shares had fallen by 42 percent, to $24.41, for a host of reasons. Savvy investing indeed.

Here’s another example: The Los Angeles Times reported in November 2006 that when Reid became Senate majority leader he committed to making earmark reform a priority, saying he’d work to keep congressmen from using federal dollars for pet projects in their districts. It was a good idea but an odd one for the senator to espouse. He had managed to get $18 million set aside to build a bridge across the Colorado River between Laughlin, Nev., and Bullhead City, Ariz., a project that wasn’t a priority for either state’s transportation agency. His ownership of 160 acres of land nearby that stood to appreciate considerably from the project had nothing to do with the decision, according to one of his aides. The property’s value has varied since then. On his financial-disclosure forms from 2006, it was valued at $250,000 to $500,000. Open Secrets now lists it as his most valuable asset, worth $1 million to $5 million as of 2010.

How Reid acquired that land is interesting, too. He put $10,000 into a pension fund his friend Clair Haycock controlled, to take over the 160-acre parcel at a price far below its assessed value. Six months later, Reid introduced legislation that would help Haycock’s industry, a move many observers said appeared to be a quid pro quo, though Reid and Haycock denied that the legislation was the result of a property deal.

We don’t know how much more money Reid has or how he made all of it. For that, we’d have to see his tax returns.