You are here: Home / ARTICLES / THE BIBLICAL USAGE OF THE WORD HATE 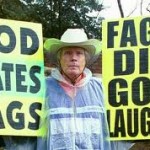 Hopefully this article will rescue some, and enlighten others so they will escape the hate doctrine preached by some pastors and evangelist. The hate doctrine teaches that God hates sinners, and the only place He loved them was at the cross. It is argued that, since the word love is used in the past tense, God has not loved any since the cross. This is an unscriptural teaching, and a perversion of the word, hate.

Words have different meaning and implication according to language and culture. The usage of the word “hate” can be determined by its context. Other teachings demand it be understood as a figure of speech, or comparison. Dake’s Reference Bible says the word is an “idiom of preference.”

n 1. (Linguistics) a group of words whose meaning cannot be predicted from the meanings of the constituent words, as for example (It was raining) cats and dogs 2. (Linguistics) linguistic usage that is grammatical and natural to native speakers of a language 3. (Linguistics) the characteristic vocabulary or usage of a specific human group or subject.

Barns says, “We are not at liberty literally to hate our parents. This would be expressly contrary to the fifth commandment. See also Eph 6:1-3; Col 3:20. But we are to love them less than we love Christ; we are to obey Christ rather than them; we are to be willing to forsake them if he calls us to go and preach his gospel;”

Adam Clark‘s Commentary say, “And hate not – Matthew, Mt 10:37, expresses the true meaning of this word, when he says, He who loveth his father and mother More than me. In Mt 6:24, he uses the word hate in the same sense. When we read, Ro 9:13, Jacob have I loved, but Esau have I hated, the meaning is simply, I have loved Jacob – the Israelites, more than Esau – the Edomites; and that this is no arbitrary interpretation of the word hate, but one agreeable to the Hebrew idiom, appears from what is said on Ge 29:30, Ge 29:31, where Leah’s being hated is explained by Rachel’s being loved more than Leah.”

John Wesley says, Verse 26. “If any man come to me, and hate not his father – Comparatively to Christ: yea, so as actually to renounce his field, oxen, wife, all things, and act as if he hated them, when they stand in competition with him. Mt 10:37.”

John Gill’s Exposition of the Whole Bible says, “… not that proper hatred of any, or all of these, is enjoined by Christ; for this would be contrary to the laws of God, to the first principles of nature, to all humanity, to the light of nature, to reason and divine revelation: but that these are not to be preferred to Christ, or loved more than he, as it is explained in Mt 10:37 yea, these are to be neglected and forsaken, and turned from with indignation and resentment, when they stand in the way of the honour and interest of Christ, and dissuade from his service: such who would be accounted the disciples of Christ, should be ready to part with their dearest relations and friends, with the greatest enjoyment of life, and with life itself, when Christ calls for it; or otherwise they are not worthy to be called his disciples.”

There is little need to continue calling on other theologians to prove our point. Although, we could find a hundred more who agree with us on this subject. The issue is clear to those who want to see it; and those who do not, no amount of proof will change their minds. Romans 5:8 “But God commendeth his love toward us, in that, while we were yet sinners, Christ died for us.”