You are here: Home / Uncategorized / MORMONISM; SHOW ME THE MONEY

MORMONISM; SHOW ME THE MONEY 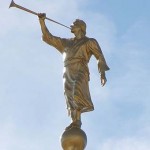 NOTE: The following information is from the CITIZEN PRESS REVOLUTION’s Blog. I have condensed the article, but attempted to retain the heart of the issue. You can read the whole article at: http://www.myspace.com/citizenpressrevolution/blog/337219999.

“The Doctrine and Covenants is the lesser known sibling to the LDS Religion’s Book of Mormon that was supposedly translated from gold plates found in the state of New York by a fellow named Joseph Smith. Unlike the Book of Mormon, the D&C is not a translation, but supposed divine revelations to Joseph Smith (mostly). One such divine revelation is quoted below from a section often referred to as the “Word of Wisdom” which is same section and reason why Mormons don’t drink alcohol or coffee or smoke.

“10 And again, verily I say unto you, all wholesome herbs God hath ordained for the constitution, nature, and use of man—  11 Every herb in the season thereof, and every fruit in the season thereof; all these to be used with prudence and thanksgiving.  12 Yea, flesh also of beasts and of the fowls of the air, I, the Lord, have ordained for the use of man with thanksgiving; nevertheless they are to be used sparingly;  13 And it is pleasing unto me that they should not be used, only in times of winter, or of cold, or famine.  14 All grain is ordained for the use of man and of beasts, to be the staff of life, not only for man but for the beasts of the field, and the fowls of heaven, and all wild animals that run or creep on the earth;  15 And these hath God made for the use of man only in times of famine and excess of hunger.  16 All grain is good for the food of man; as also the fruit of the vine; that which yieldeth fruit, whether in the ground or above the ground—  17 Nevertheless, wheat for man, and corn for the ox, and oats for the horse, and rye for the fowls and for swine, and for all beasts of the field, and barley for all useful animals, and for mild drinks, as also other grain.  18 And all saints who remember to keep and do these sayings, walking in obedience to the commandments, shall receive health in their navel and marrow to their bones; Now, if a Mormon is to say that these scriptures cannot be taken literally, why stop there?

Now, you can worm and wiggle as much as you want, but the context and the message is clear. Eating animals should be a sparse activity especially reserved for famine. With the advent of modern technology and markets,… There isn’t a good reason for many people to eat meat at all, according to the Mormons’ very own Word of Wisdom. Wouldn’t it be a logical conclusion to say that Mormons ought to be eating less meat then?

And that possibly Mormons should be seeking a nearly vegetarian diet? God wants animals to be used sparingly and prefers them to be used for times of famine.

The American diet is meat and dairy centered. The consumption of meat and dairy in Utah, a majority of the population being LDS, is about 30% above the national average. Is this not wanton eating of flesh? Is this not mean that Mormons are violating their own health codes on a daily basis? Curious, isn’t it? These verses which make up their health code are ignored by the Mormons, by those who criticize the Mormon Religion, and by those who praise the Mormon Church. It is conveniently filtered out.

Furthermore, the LDS Religion believes that when their Prophet speaks to the Church it is infallible and as correct as if God Himself was speaking. It is akin to doctrine and scripture. And God doesn’t change His mind, supposedly.

Hyrum Smith, the brother of Joseph Smith, wrote in a then LDS Church publication, Times and Seasons, in relation to the Word of Wisdom, to: “Let men attend to these instructions, let them use the things ordained of God; let them be sparing of the life of animals: “it is pleasing saith the Lord that flesh be used only in times of winter, or of famine” Sparing of the life of animals. How does one wiggle around that?

So, should it be surprising that Mitt Romney has done hunting gigs to win hunter’s votes and money? Isn’t hunting though a “vicious” disposition against animals, especially since those who hunt in America are generally well off and definitely not in any excess of dietary hunger?

If a LDS apologist says that Joseph Smith wasn’t serious when he said that or can’t be taken literally, how can we say he was serious about anything else he said? Is it just a matter of cherry picking what we like and don’t like while claiming to believe that his statements were divinely inspired, except some we ignore and forget and some we don’t?

Now, here is a special list of a certain type of business ventures and capital which the LDS Church is involved in and owns, see if you see why I grouped these together:

The LDS Church has significant financial interest, investment, and ownership in the animal enterprise industry.’ The flip flopping on regards to what diet is ordained by God is explained simply by where the money currently is.

While Joseph Smith and LDS doctrine can easily be shown to be a harsh criticism of the standard American diet which Mormons match, if not surpass, you won’t hear any pro-vegetarian or pro-semi-vegetarian arguments from Mormon prophets anymore. Nor will you hear any condemnations from Mormon prophets of the wanton consumption of meat by its members. Nor will you hear Mormon prophets condemning the absolutely vicious practices which are standard in the animal enterprise industry. The Mormon Church is a part of the animal enterprise industry and a definite player in it, especially meat.

When it comes to understanding things, a rule that almost always works: follow the money. And following the money definitely shows a good explanation why the Mormon Church is not pro-semi-vegetarian or pro-vegetarian. It is not in the interest of Mormon money to support such diets. The fact that they have scriptures and teachings by their Mormon prophets which do support such diets is ignored. What isn’t ignored, however, is money. And when it comes to which is more important to the LDS Church, sacred doctrines inspired by God and given to supposed prophets loses. And money wins.”