You are here: Home / ARTICLES / Pastor to be executed in Iran!

Muslims must be proud of a religion that can only keep their followers by killing all non Muslims, or execution any who convert to other religions. That mafia concept is so foreign from anything taught by Christianity, it is impossible for them to comprehend it. If you think Islam is a friend of America or any other religion on earth, you don’t understand their religion or culture. 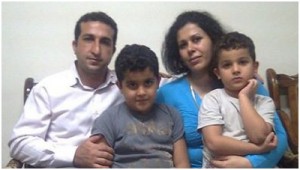 An Iranian pastor who has refused to renounce his Christian faith faces execution as early as Wednesday after his sentence was upheld by an Iranian court.

Pastor Youcef Nadarkhani, who maintains he has never been a Muslim as an adult, has Islamic ancestry and therefore must recant his faith in Jesus Christ, the 11th branch of Iran’s Gilan Provincial Court ruled. Iran’s Supreme Court had ordered the trial court to determine whether Nadarkhani had been a Muslim prior to converting to Christianity.

An undated photograph provided by the American Center for Law & Justice shows Youcef Nadarkhani, an Iranian pastor who faces execution for refusing to recant his Christian faith.

The judges, according to the American Center for Law & Justice, demanded that Nadarkhani, 34, recant his Christian faith before submission of evidence. Though the judgment runs against current Iranian and international laws and is not codified in Iranian penal code, the judge stated that the court must uphold the decision of the 27th Branch of the Supreme Court in Qom.

When asked to repent, Nadarkhani stated: “Repent means to return. What should I return to? To the blasphemy that I had before my faith in Christ?”

“To the religion of your ancestors, Islam,” the judge replied, according to the American Center for Law & Justice.

Nadarkhani is the latest Christian cleric to be imprisoned in Iran for his religious beliefs. According to Elam Ministries, a United Kingdom-based organization that serves Christian churches in Iran, there was a significant increase in the number of Christians arrested solely for practicing their faith between June 2010 and January 2011. A total of 202 arrests occurred during that six-month period, including 33 people who remained in prison as of January, Elam reported.

An Assyrian evangelical pastor, Rev. Wilson Issavi, was imprisoned for 54 days for allegedly converting Muslims prior to his release in March 2010, Elam officials told FoxNews.com.
Nadarkhani, a pastor in the 400-member Church of Iran, has been held in that country’s Gilan Province since October 2009, after he protested to local education authorities that his son was forced to read from the Koran at school. His wife, Fatemeh Pasandideh, was also arrested in June 2010 in an apparent attempt to pressure him to renounce his faith. She was released in October 2010, according to Amnesty International.
Nadarkhani was sentenced to death for apostasy last September based on religious writings by Iranian clerics, including Ayatollah Khomeini, the founder of the Islamic Republic of Iran, despite the fact that there is no offense of “apostasy” in the nation’s penal code, Amnesty International reports.
In June, the Supreme Court of Iran ruled that a lower court should re-examine procedural flaws in the case, giving local judges the power to decide whether to release, execute or retry Nadarkhani. The verdict, according to Amnesty International, includes a provision for the sentence to be overturned should Nadarkhani renounce his faith.
Elise Auerbach, an Iranian analyst for Amnesty International USA, told FoxNews.com that an execution for apostasy has not been carried out in Iran since 1990. Nadarkhani’s sentence is a “clear violation of international law,” she said.
“The key is to keep up the pressure and to publicize the story because it obviously outrages most people,” Auerbach said. “It’s part of the pattern of persecution based on religion in Iran.”
Kiri Kankhwende, a spokeswoman for Christian Solidarity Worldwide, a human rights organization that specializes in religious freedom, told FoxNews.com that Nadarkhani was asked for the fourth time to renounce his faith during a hearing early Wednesday and he denied that request.
“We’re waiting to hear the final outcome,” she told FoxNews.com. We’re still waiting to hear what they’ve decided.”
Kankhwende said Nadarkhani could be executed Wednesday or Thursday.
“Iran is unpredictable,” she said. “We can’t say when it might happen. It’s a very real threat, but we can’t say when exactly.”
Officials at the U.S. State Department declined to comment when reached on Wednesday. Attempts to reach his attorney, Mohammed Ali Dadkhah, were not successful.
House Speaker John Boehner said Nadarkhani’s case is “distressing for people of every country and creed,” according to a statement released on Wednesday.
“While Iran’s government claims to promote tolerance, it continues to imprison many of its people because of their faith,” the statement read. “This goes beyond the law to an issue of fundamental respect for human dignity. I urge Iran’s leaders to abandon this dark path, spare [Nadarkhani’s] life, and grant him a full and unconditional release.”
Father Jonathan Morris, a Catholic priest in the Archdiocese of New York and an analyst for Fox News Channel, said Nadarkhani’s case is “unmistakable evidence” that Iran is executing Christians simply because they refuse to become Muslims.
Morris continued: “Will President Obama, and the free world, allow the United Nations to continue in its cowardly silence on this matter?”

This was forwarded to us by Dr. Richard Flanders, a friend of our ministry. He was one of the key-note speakers in Kurdistan during our school for Pastors.