You are here: Home / ARTICLES / IS HAROLD CAMPING, A FALSE PROPHET?

WHO IS THIS HAROLD CAMPING? 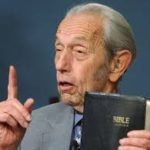 When one is familiar with the literal and dispensational teaching of the Bible; listening to Harold Camping sounds like a combination of Charlie Sheen and Jared L. Loughner. I have never read any person who is as confused and deceptive when it comes to handling the Word of God.

In my book, Standards and The Standard, I devoted several pages exposing the false teaching of Camping. He proclaimed that the Lord would return in 1994. Since he missed it, that makes him a false prophet, and God has something to say about that: “When a prophet speaketh in the name of the LORD, if the thing follow not, nor come to pass, that is the thing which the LORD hath not spoken, but the prophet hath spoken it presumptuously: thou shalt not be afraid of him.” Deuteronomy 18:22.

Camping now teaches that the rapture will happen May 21, 2011. According to Camping’s prediction, the Rapture will happen exactly 7,000 years from the date that God first warned people about the flood. He said the flood happened in 4990 B.C., on what would have been May 21 in the modern calendar.

Camping pulls the date of the flood out of his make-believe hat.

Camping makes the following statement which shows what he does not believe: “They (religious leaders) may be told that the end will not come until Antichrist rises as a political leader who will make them take the mark of the beast.” Many are told that God will rapture His people before a 7 year Great Tribulation after which Christ will set up a 1000 year reign from an earthly throne in Jerusalem. Others are told that Christ will come to rapture believers the same day he destroys the world. While just about every church has a different idea as to what the Bible teaches concerning the end, they all seem to agree on one thing; no man can know the day or the hour of Christ’s return because the scriptures say that He is coming as a thief in the night. But are they correct? Can We Know?” Camping goes on to say, “God will destroy this world on October 21, 2011… His Word showing us that these dates are 100% accurate and beyond dispute.” The Bible does not give these details, most Bible believers would dispute them.

Harold Camping teaches that EVERY church in the world is an apostate! He teaches that the church age ended in 1994 and that the Holy Spirit is NO LONGER working in the church!

Camping has taken the teaching of a Baptist preacher by the name of William Miller who thought he had the time of Christ’s return as 1843. His followers sold their homes and businesses and went about the country preaching the imminent return of Christ.  They were the followers of William Miller, a farmer and self-taught bible scholar from New York. Miller believed the cleansing of the temple in Daniel 8 was not of a real temple but rather referred to the purification of the earth by fire at the Second Coming of Christ. Miller’s date was between March 21, 1843, and March 21, 1844.  He began to teach this throughout the Northeast and gained a wide following.  Despite the great excitement, March 21, 1844, came and went without the return of Christ.  Miller was devastated, and a new date was set for October 22, 1844. These teachings fathered both, the teachings of Camping, the Seventh Day Adventist and the Jehovah’s Witnesses religions.

Here is the sum and purpose of Camping’s teaching: He wants Christians to believe that God is through with local churches and that all of them are apostate. Secondly, he wants you to follow him only, listen to his radio program, and purchase his literature. Oh, by the way, you could start sending your offerings to his ministry. I know this has not crossed the mind of the false prophet, but if you did it, I am sure he would appreciate it.