You are here: Home / ARTICLES / THE PARENTHESIS 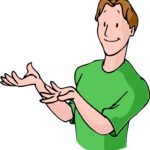 Of the many rules or principles of Bible interpretation, one must not overlook the principle called the parenthesis. “A parenthesis is used to mark off explanatory or qualifying remarks in writing or printing or enclose a sum, product… A comment departing from the theme of discourse; a digression.” American Heritage Dictionary-

The difference in the Bible is that the parenthesis is not filled by the writer, and it remained a mystery until revealed to and by Paul. Peter spoke of this when he said, “Searching what, or what manner of time the Spirit of Christ which was in them did signify, when it testified beforehand the sufferings of Christ, (gap here) and the glory that should follow.” 1 Peter 1:11.

The parenthesis was always between the suffering of Christ and the glory to follow. None of the Old Testament saints or the followers of Christ understood the mystery that was hid from the foundation of the world.

The parables of Matthew 13 were primary in preaching the mysteries of the Kingdom of Heaven during the parenthesis that would exist from the crucifixion to the Revelation at the Second Advent. The secondary mystery was the preaching of the church, the body of Christ in this dispensation.

Let us observe this principle throughout Scripture. It is the key that unlocks Scripture.

Luke 4:18-22 “The Spirit of the Lord is upon me, because he hath anointed me to preach the gospel to the poor; he hath sent me to heal the brokenhearted, to preach deliverance to the captives, and recovering of sight to the blind, to set at liberty them that are bruised,  To preach the acceptable year of the Lord. (gap here)  And he closed the book, and he gave it again to the minister, and sat down. And the eyes of all them that were in the synagogue were fastened on him.  And he began to say unto them, This day is this scripture fulfilled in your ears. And all bare him witness, and wondered at the gracious words which proceeded out of his mouth. And they said, Is not this Joseph’s son?” See Isa. 61:1-2.

Another example is Psalm 22:21-22 “Save me from the lion’s mouth: for thou hast heard me from the horns of the unicorns. (gap here) I will declare thy name unto my brethren: in the midst of the congregation will I praise thee.” This text speaks of Christ’s death and resurrection.

We see the same principle in Psalm 118:22 “The stone which the builders refused (gap here) is become the head stone of the corner.” Note Isaiah 9:6 “For unto us a child is born, unto us a son is given: (gap here) and the government shall be upon his shoulder: and his name shall be called Wonderful, Counselor, The mighty God, The everlasting Father, The Prince of Peace.” Because we have the writings of Paul, we can clearly see the mystery that fits in the parentheses.

Because we have the writings of Paul, we can clearly see the mystery that fits in the parentheses.

One more example should be sufficient to establish this principle of Bible interpretation. “And he said unto them, What manner of communications are these that ye have one to another, as ye walk, and are sad?  And the one of them, whose name was Cleopas, answering said unto him, Art thou only a stranger in Jerusalem, and hast not known the things which are come to pass there in these days?  And he said unto them, What things? And they said unto him, Concerning Jesus of Nazareth, which was a prophet mighty in deed and word before God and all the people:  And how the chief priests and our rulers delivered him to be condemned to death, and have crucified him.  But we trusted that it had been he which should have redeemed Israel: and beside all this, to day is the third day since these things were done.  Yea, and certain women also of our company made us astonished, which were early at the sepulchre;  And when they found not his body, they came, saying, that they had also seen a vision of angels, which said that he was alive. And certain of them which were with us went to the sepulchre, and found it even so as the women had said: but him they saw not. Then he said unto them, O fools, and slow of heart to believe all that the prophets have spoken:  Ought not Christ to have suffered these things,( the parenthesis goes here) and to enter into his glory?  And beginning at Moses and all the prophets, he expounded unto them in all the scriptures the things concerning himself.  And they drew nigh unto the village, whither they went: and he made as though he would have gone further. But they constrained him, saying, Abide with us: for it is toward evening, and the day is far spent. And he went in to tarry with them.  And it came to pass, as he sat at meat with them, he took bread, and blessed it, and brake, and gave to them.  And their eyes were opened, and they knew him; and he vanished out of their sight.  And they said one to another, Did not our heart burn within us, while he talked with us by the way, and while he opened to us the scriptures?” Luke 24:17-32.