You are here: Home / ARTICLES / DOING A WRONG THING RIGHT AND A RIGHT THING WRONG 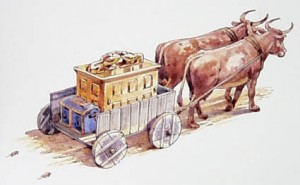 The reader will notice that these two events stand out like bookends of all that transpired between I Samuel 6 and II Samuel 6. In first Samuel, the Philistines had defeated Israel and carried away the ark. The consequences of that event are in chapter six. Then, in II Samuel chapter 6, King David attempts to bring the ark to Jerusalem. What I want us to note the similarity of the two events, how each was exercised, and what the results were.

“And the men did so; and took two milch kine, and tied them to the cart, and shut up their calves at home:  And they laid the ark of the LORD upon the cart… And the kine took the straight way to the way of Bethshemesh, and went along the highway, lowing as they went, and turned not aside to the right hand or to the left; and the lords of the Philistines went after them unto the border of Bethshemesh.” 1 Samuel 6:10-12.

“And David arose, and went with all the people that were with him from Baale of Judah, to bring up from thence the ark of God… And they set the ark of God upon a new cart, and brought it out of the house of Abinadab that was in Gibeah: and Uzzah and Ahio, the sons of Abinadab, drave the new cart… Uzzah put forth his hand to the ark of God, and took hold of it; for the oxen shook it.  And the anger of the LORD was kindled against Uzzah; and God smote him there for his error; and there he died by the ark of God.” 2 Samuel 6:2-7.

The Philistines were the enemies of Israel and of God, but because of the wickedness of Israel, He allowed the Philistines to defeat them and carry away the ark. Defeat and servitude were the repeated history of Israel throughout much of the Old Testament.

The Philistines found that the presence of the ark was not a blessing to their land or their bodies; both were plagued. As a result, they acknowledged the greatness of the God and reasoned how they might stay the plague and get the ark back to Israel.

They decided an atonement of golden images should accompany the ark. To verify that the plagues were indeed from God, they would try an unquestionable test. They made a new cart and attached two cows that had baby calves. The calves were secured in stalls and the mother cows were sent down the road with the ark. If the cows left their calves behind and took the ark back, without drivers, then there would be no doubt that all was of the God of Israel.

Now, everything they were doing was wrong, but they were doing right! First of all, the ark was not to be in the possession of the Philistines. No other transportation was allowed other than the priest of Israel. But God, in His grace, not only allows them to return it on a cart, He permitted them to physically handle it when taking it from Israel and when returning it. In addition, the offerings to God were idols of gold! God accepted their efforts and healed them of their plagues.

This teaches us that we cannot pin down or patent how God is going to deal with the lost. In some cases, ignorance may be a blessing. They demonstrated more fear of God than wicked Israel.

On the other end of the story we find King David attempting to bring the ark up to Jerusalem, but his efforts are wrong. Once again we see a new cart made and pulled by two oxen. How the ark was moved to the cart we are not told, but someone had to lift it. Regardless, none of this was done the right way, and David knew it. A right thing, bringing the ark home,  was done the wrong way. To add to the lesson, the oxen shook the cart, and Uzzah put for his hand to steady it. God killed him!

The Christians responsibility is much greater than those of the world.

The lesson is this; “But he that knew not, and did commit things worthy of stripes, shall be beaten with few stripes. For unto whomsoever much is given, of him shall be much required: and to whom men have committed much, of him they will ask the more.” Luke 12:48. Israel had the Law of God and all the instructions concerning the handling and moving of the ark. “For I could wish that myself were accursed from Christ for my brethren, my kinsmen according to the flesh: Who are Israelites; to whom pertaineth the adoption, and the glory, and the covenants, and the giving of the law, and the service of God, and the promises; Whose are the fathers, and of whom as concerning the flesh Christ came, who is over all, God blessed for ever. Amen.” Romans 9:3-5. Therefore, the Philistines received few stripes compared to the judgments on Israel.

Christian, God expects very little from the world. They are ignorant and in darkness. But, you and I are children of Light, and our responsibility is much greater than theirs. The problems with Christianity are not the fault of the world. Most problems are rebellion, unbelief, and presumption of believers. Sometimes wrong things can be done in a right way, while the right things are done in a wrong way. Maybe we should evaluate our ministry and make sure we are doing the right things the right way.