You are here: Home / ARTICLES / WHY SOME PEOPLE WILL NEVER LIVE FOR GOD

THE REACTION OF PEOPLE TO THE GOSPEL 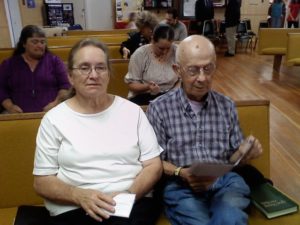 “And he spake many things unto them in parables, saying, Behold, a sower went forth to sow; 4 And when he sowed, some seeds fell by the way side, and the fowls came and devoured them up: 5 Some fell upon stony places, where they had not much earth: and forthwith they sprung up, because they had no deepness of earth: 6 And when the sun was up, they were scorched; and because they had no root, they withered away. 7 And some fell among thorns; and the thorns sprung up, and choked them: 8 But other fell into good ground, and brought forth fruit, some an hundredfold, some sixtyfold, some thirtyfold. 9 Who hath ears to hear, let him hear.” Matthew 13:3-9.

The pastor must not get discouraged, but he must face the fact that the majority who hear his messages will never evidence the fruits of salvation. This should not deter him from faithfulness to his calling. There is no way to be sure who is saved or not. We must leave that decision with the Lord.

The above text, gives three reasons why some will not live for Christ.

A lack of spiritual understanding:

V 3-4; 19. “When any one heareth the word of the kingdom, and understandeth it not, then cometh the wicked one, and catcheth away that which was sown in his heart. This is he which received seed by the way side.” Matthew 13:19.

Paul lists ignorance as one of the reasons Israel was not saved.  They were ignorant of God’s righteousness and attempting to work their way to heaven. The major reason people are not saved today is their failure to understanding the plan of salvation for this dispensation. Much of this ignorance must be laid at the feet of pastors and teachers. All a person must to do is listen to radio and television preachers and evangelist to witness this mass confusion. If that is not enough, just watch Oprah Winfrey, and her new age religion. Millions listen to her every day and embrace her teachings. The text makes it clear that the Truth had been sown, but the soil was not receptive because of a lack of understanding.

A lack of Christian character:

5-6; 20-21. “But he that received the seed into stony places, the same is he that heareth the word, and anon with joy receiveth it; 21 Yet hath he not root in himself, but dureth for a while: for when tribulation or persecution ariseth because of the word, by and by he is offended.” Matthew 13:20-21.

This second group showed evidence of real interest at first. They appeared to be eager to follow the Lord wherever He leads. These dear people will respond to any invitation. They may get baptized and join the church. But, within a few weeks or months they disappear. No matter how many calls or letters you send, all is to no avail.

Something they heard or an unpleasant experienced caused their apparent spiritual interest to dry up and die. The reason may have been criticism from a family member, a coworker, or a friend. Perhaps the call to service or to give up some pet sin was all that was needed to cause them to wither and die. The real reason, according to the Lord, is a heart problem. They simply lack the moral character to do the right thing. There is no depth of commitment to their profession.

A lack of Self control:

Credit cards will choke the life out of you if you don’t get your spending under control.

V. 7; 22. “He also that received seed among the thorns is he that heareth the word; and the care of this world, and the deceitfulness of riches, choke the word, and he becometh unfruitful.” Matthew 13:22.

Materialism is the number one problem in America: The lust for things we don’t need has caused more divorces and self-centeredness than anything else. Many Americans are very unhappy. They believe they have a right to be happy; and the more things they possess, the happier they will be. This spending trap creates all kinds of emotional, moral, and spiritual problems.

The quest for the latest and the best is the killer. Young couples believe they should have two new cars in the driveway, own a brand new home, have it fully furnished with the most modern furniture, and then be able to eat out in restaurants each night. This is a picture of the average young family, and it is the road to sure disaster. Your credit cards will choke the life out of you if you don’t get your spending under control. Once people begin to have the above problem, they cannot stay focused on church, the Bible, or spiritual things. The cares of this life choke out all that is valuable and important.

Thankfully, some will live for the Lord and serve Him. V.23. “But he that received seed into the good ground is he that heareth the word, and understandeth it; which also beareth fruit, and bringeth forth, some an hundredfold, some sixty, some thirty.” Matthew 13:23.

Pastor, there are those who will hear the Word, receive Christ, and become productive believers! You will notice that people differ in abilities and productivity. So preach the Word to everyone you can. Expect God to bless and give souls for your work. But, you must remember that many, who make professions, will never live for Christ. The real problem is not the seed. It’s the soil. If you want more like those in verse 23, you must have more professions. That’s how you do it.